Most modern applications look more or less like this: 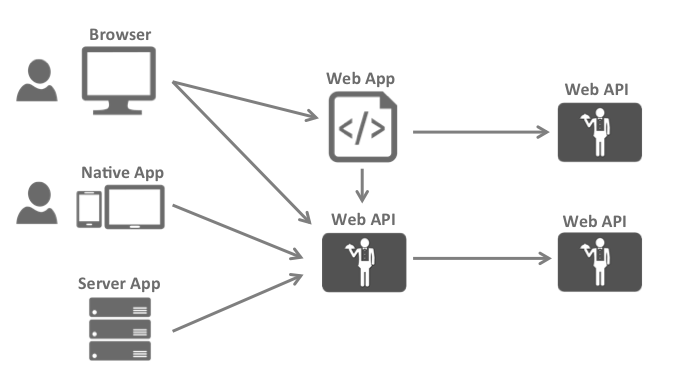 The typical interactions are:

Typically each and every layer (front-end, middle-tier and back-end) has to protect resources and implement authentication and/or authorization – and quite typically against the same user store.

This is why we don’t implement these fundamental security functions in the business applications/endpoints themselves, but rather outsource that critical functionality to a service - the security token service.

This leads to the following security architecture and usage of protocols: 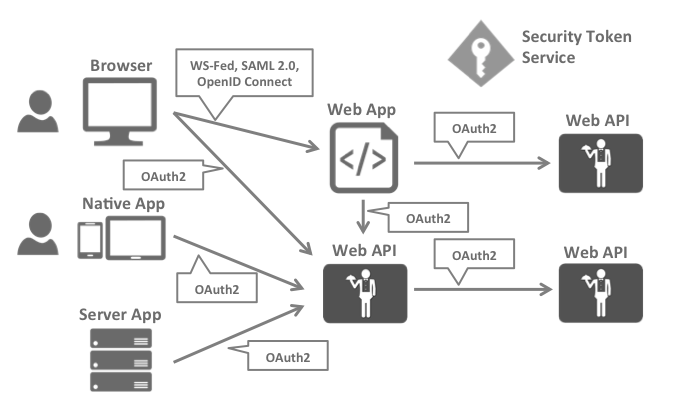 This divides the security concerns into two parts.

Authentication is needed when an application needs to know about the identity of the current user. Typically these applications manage data on behalf of that user and need to make sure that this user can only access the data he is allowed to. The most common example for that is (classic) web applications – but native and JS-based applications also have need for authentication.

The most common authentication protocols are SAML2p, WS-Federation and OpenID Connect – SAML2p being the most popular and the most widely deployed.

OpenID Connect is the newest of the three, but is generally considered to be the future because it has the most potential for modern applications. It was built for mobile application scenarios right from the start and is designed to be API friendly.

Applications have two fundamental ways with which they communicate with APIs – using the application identity, or delegating the user’s identity. Sometimes both ways need to be combined.

OAuth2 is a protocol that allows applications to request access tokens from a security token service and use them to communicate with APIs. This reduces complexity on both the client applications as well as the APIs since authentication and authorization can be centralized.

OpenID Connect and OAuth2 – better together

OpenID Connect and OAuth2 are very similar – in fact OpenID Connect is an extension on top of OAuth2. This means that you can combine the two fundamental security concerns – authentication and API access into a single protocol – and often a single round trip to the security token service.

This is why we believe that the combination of OpenID Connect and OAuth2 is the best approach to secure modern applications for the foreseeable future. IdentityServer3 is an implementation of these two protocols and is highly optimized to solve the typical security problems of today’s mobile, native and web applications.